Whakapapa: Get Down Upon Your Knees. Reuben Paterson Reuben Paterson's glittering, painted on canvas installation comes direct from the 6th Asia Pacific Triennial of Contemporary Art (APT) in Brisbane, Australia. The APT includes work of more than 100 artists from 25 countries, including collaborations and collectives, which reflect the diversity of practices across Asia, the Pacific and Australia.

Tauranga Art Gallery is the first venue in New Zealand to have this work.

Whakapapa: get down upon your knees is about family and lineage. Paterson's lineage is diverse, being Mäori and Scottish, and the objects from which Paterson has drawn inspiration, explore both his Scottish ancestry and the nuance of Paterson's iwi, Ngati Rangitihi and their long association with art and craft. This manifests in Whakapapa: get down upon your knees through traditional koru and paisley designs. The design aspect is fundamental to Paterson's painting, with strong use of colour, repetition and lines, which are used to link the present with the past. All is topped with a lavish dusting of glitter, Paterson's signature.

The installation also includes a DVD entitled Te Pütahitanga ö Rehua based on whakapapa, ancestry and roots, from 17 July.

Reuben Paterson's family comes from Matata. He has exhibited in solo and group exhibitions extensively throughout New Zealand and internationally, and was awarded the Möet et Chandon Arts Fellowship to France in 1997, the youngest Mäori recipient of New Zealand's only fine art award at this time. 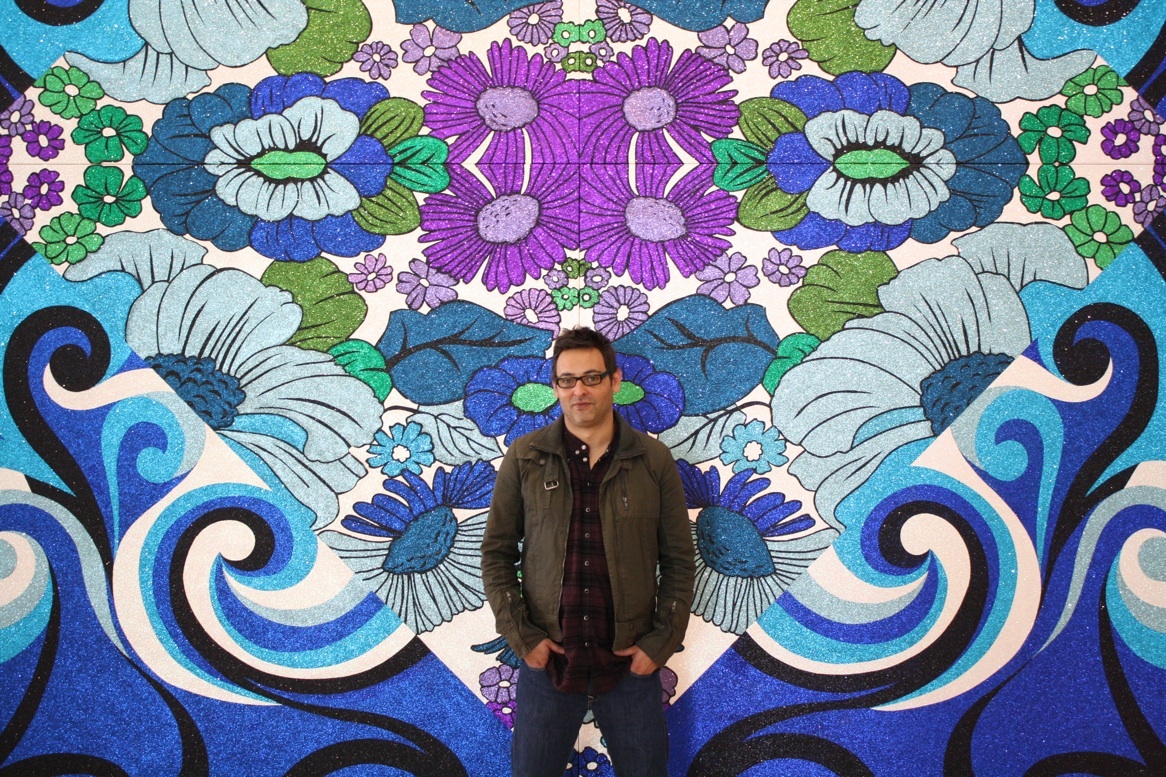 Gracing a recent cover of Australia’s most prized art journal, Art & Australia was Reuben Paterson’s Whakapapa: get down upon your knees. A career highlight in itself for any artist, the fact that it was chosen from 313 works from the APT6 exhibition is testimony to Paterson’s impact on the contemporary art scene (Sixth Asia Pacific Triennial (APT6), Gallery of Modern Art, Brisbane, 5 December 2009 – 5 April 2010. Of the 25 countries represented, New Zealand was the chosen one.

This cover also spoke of the importance of New Zealand on the international art scene as well as showcasing a painting that encapsulated Paterson’s Maori and Scottish heritage. Like many New Zealanders, Paterson’s lineage is diverse, yet in this one work they come together, uniting his whakapapa, as Michael Fitzgerard suggested of Whakapapa: get down upon your knees, …a billboard-sized homage to the artist’s heritage – particularly to his kuia or grandmother, whose exuberant life ended sadly in suicide ([1] Art & Australia, Volume 47, No. 2, Summer 2009, p.290.Reuben Paterson (b.1973) uses “wallpaper, Hawaiian shirts, Dad’s ties and my kuia’s party dresses” as the inspiration behind the visual patterns in Whakapapa: get down upon your knees. Each design has its roots, not only in the history of design, but also in Paterson’s familial history. The concept of whakapapa is the agenda behind Reuben Paterson’s large and colourful canvases that make up Whakapapa: get down upon your knees.

This work, originally executed for APT6, is not a mere image of dazzling forms, colour and light, but is a family tree both current and ancient. It is also a celebration of family; the objects of inspiration go some way in exploring the nuance of Paterson’s iwi, Ngati Rangitihi, and their long association with art and craft. The sheer scale of Whakapapa: get down upon your knees – 16 square metres in total – is grandeur personified. Made to hang originally on one large wall, Paterson’s work is a very public work and is both artistically monumental, as well as for the people. The work can be exhibited either as one large work, or as four in smaller segments. Thus Whakapapa: get down upon your knees is true to its literal meaning, as the painting can find new ways of presenting itself just as whakapapa can also represent reconfigurations of families, including the joining of different iwi.

The overt use of glitter is Paterson’s artistic signature; a mainstay of his oeuvre, glitter is ever-present and not just for its ‘pretty’ qualities. Underpinning glitter is the association of wealth; precious metals and gems are status symbols. Historically the sparkle which glitter puts out was the reserve of Byzantine churches. Exteriors of such churches were relatively unadorned but the interiors were a new world of light-filled imagery. In particular, candlelight, created sparkly effects from mosaic tiles emulating the celestial and spiritual worlds. More recently, westernised Christmas cards were bedecked with glitter in order to make them special. Tinsel and glitter, hangovers from European Christmases, are still very much part of New Zealand’s Christmas rituals. Paterson combines designs from his whakapapa, both Maori (the koru) and Scottish (the paisley – thought technically designed in India, paisley has been manufactured in Scotland). The grid is fundamental to his design, a formula that has roots in modernist painting heritage. For instance, in 1983 Auckland City Art Gallery’s exhibition The Grid celebrated the use of this compositional mathematical device. In Whakapapa: get down upon your knees, the grid is utilised to the extreme in that the work can be exhibited as one perfect square (8 x 8 metres) or in varying configurations, as seen at the Tauranga Art Gallery.

As much as Whakapapa: get down upon your knees is about New Zealand and Paterson’s roots, it could also be about the appropriation of international design as the red/black/white panel was inspired by the Italian fashion house, Pucci, which he discovered while travelling to Pescara, Italy. Paterson stripped the design back and ‘korufied’ (his word) it. In doing so he challenges its identity and originality.

The design aspect is as fundamental to the painting, as the subject matter. Whakapapa is about lineage and Paterson’s painting is dependent on line, and strong decisive ones at that. Each line calls on an aspect of Paterson’s past, for instance, he explains:

…the black kowhaiwhai pattern is called Puhoro. It is found on the waka (canoe) which links directly to whakapapa in that they brought our ancestors to Aotearoa. (Email correspondence to Maud Burge, Queensland Art Gallery, 13 October 2009).

Perhaps the only specific ference between Paterson’s current practice and the making of art in the traditional Maori context is that he works as an individual, not collectively. Thus, Whakapapa: get down on your knees can be appreciated on many levels, whether simply appreciating the balletic kaleidoscope of pattern or exploring the meaning and respect for whakapapa. Whakapapa: get down on your knees is far from being simply decorative, it speaks volumes about family ties and overtly suggests, the importance of not forgetting one’s own whakapapa, reminding us all of our ancestry, where we come from and who we are. As Paterson remarks, “I honour and appreciate history … in an unconventional way.”