The Making of the Word Witch 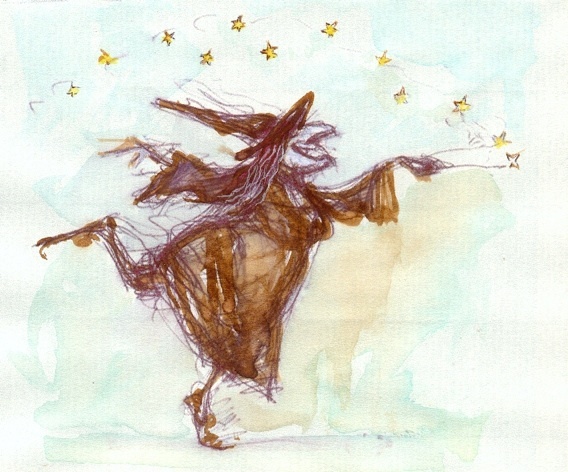 Margaret Mahy is one of the world's best-loved children's authors who has delighted young and old alike for the past fifty years, with her whimsical tales that set fire to the imagination.

The Word Witch is a collection of Mahy's poems, from school readers, collections, picture books and her personal papers, a project that was spearheaded by author Tessa Duder in 2008. The book is testament to how Mahy's lyrical poems can bring to life the weird and the wonderful with rhymes and rhythms that bounce off the tongue and bring the words themselves to life.

Each of the book's 66 poems has been illustrated by renowned illustrator, David Elliot, either with a single image or with a storyboard approach that matches the narrative of the poem.

The Making of the Word Witch is a glimpse into Elliot's creation of the book, from beginning ideas to the finished illustration. It is also a window into the imagination and how ideas can be transformed into delightful images that mirror the spirit of Mahy's magical verse.

This is an exhibition that will not only delight, but inspire, the child in all of us.

Margaret Mahy
Internationally considered one of the world’s greatest 20th / 21st century writers in English for young children and teenagers, Margaret Mahy 's career has also included writing for theatre and television series for both adults and children. Mahy was born in Whakatane in 1936, and wrote her first story at the age of seven. After graduating from Auckland University College and Canterbury University College in 1955 with a BA, Mahy attended the New Zealand Library School in Wellington where she gained her Librarian's Diploma. Mahy then worked for the Petone Public Library and in 1967, for the School Library Service in Christchurch. During this time, Mahy had stories published in the New Zealand School Journal, and her first book published, A Lion in the Meadow, in 1969. In 1976 Mahy was appointed Children's Librarian at Canterbury Public Library. In 1980 she became a full-time writer. Her 200-plus titles include novels, novellas, picture books, collections, non-fiction, and more than a hundred ‘school readers’ for educational programmes. Her work has been published for over thirty years in more than 15 languages. Mahy is New Zealand’s most decorated living writer, being the only author ever appointed an Ordinary Member of New Zealand Order of Merit (1993) and the recipient of two honorary doctorates of letters from the University of Canterbury, in 1993, and the University of Waikato, 2005. In 2006 Margaret was awarded the Hans Christian Andersen Medal.

David Elliot
The core of the Ashburton Art Gallery's collection is the work of award winning children's book author and illustrator, David Elliot. Elliot was born and raised in Ashburton before moving to Christchurch to study a Diploma in Visual Arts at the University of Canterbury. After he graduated, Elliot worked as a designer for a couple of years before travelling to Antarctica, through Asia and Europe, and onto Scotland where he became gatekeeper at Edinburgh Zoo. It was during this time living in the gatekeepers cottage at the zoo, that Elliot became increasingly interested in writing and illustrating books for children, wandering the zoo at night, observing and drawing the animals. Elliot has provided illustrations for numerous New Zealand children's books, including Janet Frame's only book for children, Mona Minim and the Smell of the Sun. He has also written and illustrated five picture books of his own. Elliot's work is increasingly in demand overseas and he has illustrated books by UK author, Brian Jacques (Redwall series) and US author TA Barron (Great Tree of Avalon series). He has won many awards for his work, including the Unilever/Choysa Award and Best Picture Book in the New Zealand Post Children's Book Awards. Elliot currently teaches drawing part-time as part of a visual arts course in Dunedin. The rest of his week is spent on his own work in his Port Chalmers studio.