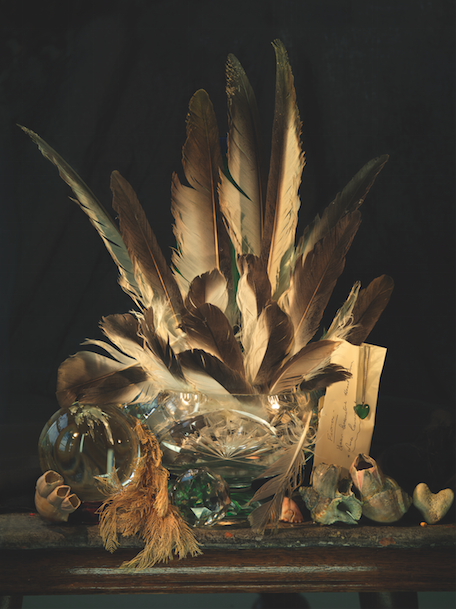 This exhibition charts the recent photographic practice of artist Fiona Pardington (Ngāi Tahu, Kati Mamoe and Ngāti Kahungunu, Clan Cameron of Erracht). With a diverse range of subjects, the photographs in this exhibition act as windows into the artist’s deep connection with nature and in particular the elemental forces of land, sea and sky.

It features a selection of works that reference her interest in still-life, a genre in Western painting that depicted collections of arranged objects. Still-life painting became a tool used by artists and their patrons to indicate important relationships from everyday life suggested through symbolic associations. Pardington has used this approach as a way to make her own connections to places, people and ideas.

Through the act of collecting and foraging, Pardington constructs new affiliations to the environment, linking the spiritual and physical worlds through a series of moments captured in time. Like the remnants of history, these images bring together the past, present and future in a hauntingly sublime way. They attempt to make sense of the world, while still remaining fluid and open to interpretation.

Pardington is of Māori and Scottish descent and holds a Doctorate in Fine Arts from the University of Auckland. She’s a Member of the New Zealand Order of Merit and her work is held in major collections both in New Zealand and internationally. In 2016 Pardington was named a Knight in the Order of Arts and Letters (Chevalier de l’ordre des Arts et des Lettres) by the French Prime Minister and was the first New Zealand visual artist to receive this honour.

Soft Paradise/ Ka Rongo Te Pō, Ka Rongo Te Ao: Works by Fiona Pardington has been developed by Tauranga Art Gallery in partnership with the artist and Starkwhite, Auckland and aligns with the Bay of Plenty Garden & Art Festival.