In commemoration of the 175th anniversary of the signing of Te Tiriti o Waitangi/The Treaty of Waitangi, this exhibition brings together five women who have made work in response to the impact of the Treaty and its effect on Māori today.

A staunch supporter of Māori rights and the power and prestige of Māori women, she has been exhibiting nationally and internationally for over four decades.

She is recognised as an art icon and role model, a leading voice in contemporary Māori art and an international leader in indigenous art.

Through her work Kahukiwa has established strong connections between art and politics and has done much to raise awareness of contemporary Māori art on the world stage. 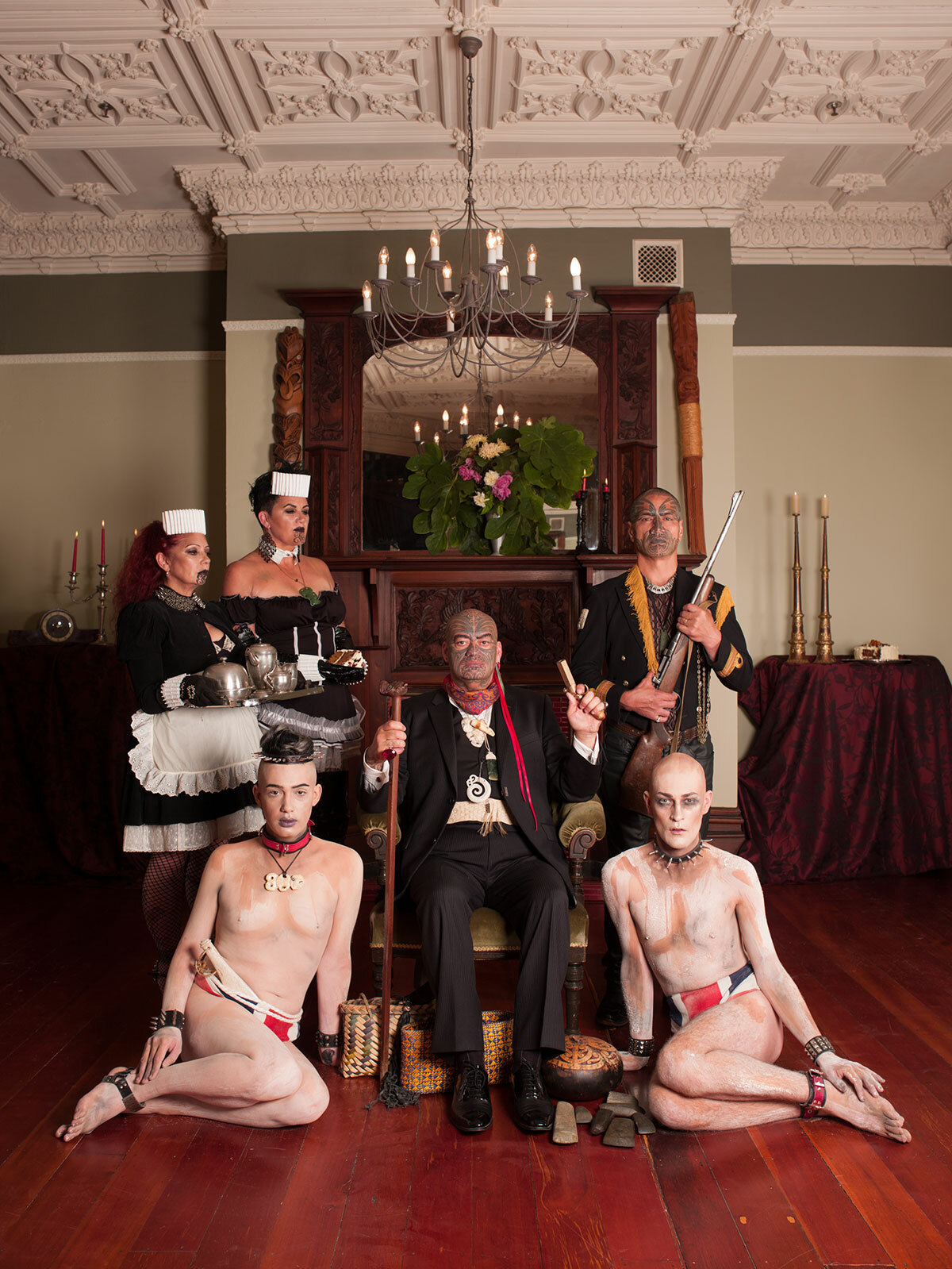 A House Divided Against itself Cannot Stand. Suzanne Tamaki.

In 1989 she collaborated with two other Whangarei mums in one of their kitchens to design the Tino Rangatiratanga flag, which has been acknowledged as a symbol of Māori sovereignty and used in protest marches and demonstrations throughout New Zealand. The flag features in much of the work in the exhibition.

Tamaki was one of the founding members of the Pacific Sisters fashion collective in the mid 90’s participating in various multimedia fashion shows including the 12th Sydney Biennale and the South Pacific Festival of the Arts in Samoa, Palau and Pagopago. Her work is exhibited and collected extensively throughout New Zealand and the Pacific. Tracey Tawhiao (Ngai te Rangi, Whakatohea, Tuwharetoa) is a writer, performance poet, filmmaker, qualified lawyer and leading Māori artist based in Auckland. Her artworks are made from newspaper where Tawhiao uses Māori symbols and motifs to ‘rewrite’ and recreate news stories from an alternative, Māori perspective.

By obscuring certain words in a headline or passages of an article, and layering sheet of newspaper she changes the focus of each news item and changes the often negative editorial slant.

Andrea Hopkins is one of Northland’s leading contemporary painters. She is known nationally and internationally for her work which blends cultural semiotics with surreal landscapes.

Of Māori, New Zealand and Welsh decent Hopkins is influenced by the Māori concepts of wairua/spiritual, hinengaro/emotional, whanau/family and tangata/the physical being. Her practice involves taking everyday identities and Māori motifs and places them against delicately brushed landscapes conveying messages of duality and strength.

Featuring work from Mana Wahine Robyn Kahukiwa, Tracey Tawhiao, Suzanne Tamaki, Linda Munn and Andrea Hopkins, this provocative exhibition explores some of the social and political issues that have arisen since the treaty was signed in 1840, in the mediums of painting and photography.

This exhibition is developed and toured by Expressions Whirinaki with the generous support of Creative New Zealand and Waitangi Day Commemoration Fund.