The imaginative life and times of Graham Percy This exhibition rediscovers the work of one of New Zealand's most talented and original artists.

Percy left New Zealand in the mid-1960s and became a hugely respected artist and illustrator overseas.

His works are held in the National Galleries of Scotland yet since his early years in Auckland they have never been exhibited publicly in New Zealand before this exhibition tour.

The exhibition is curated by leading art critic, curator and poet, Gregory O'Brien. 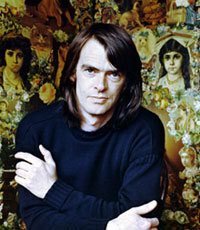 Graham Percy (1938 - 2008) grew up in Taranaki, Warkworth and Auckland. After graduating from Elam School of Fine Arts in 1959, he embarked on a career as illustrator/designer/artist. He also designed some award-winning Crown Lynn crockery.

He won a scholarship in 1964 to study at the Royal College of Art, London and upon graduation, established himself as a freelance designer and illustrator in the United Kingdom.

During the last years of his life, Percy focused on his own drawings, including spending time thinking about what it meant to be an artist - particularly a New Zealand artist, working in Great Britain. He lived in London until his death in 2008.