With their pioneering use of virtual reality, artists Jess Johnson and Simon Ward, have created a mysterious universe of alien architecture populated by humanoid clones and cryptic symbols, traversed via a network of travellators and gateways.

Johnson’s drawings are transformed from analogue into digital, animated by Ward and enriched with input from developer Kenny Smith and sound composer Andrew Clarke to create a virtual realty quest; a choose-your-own adventure into the technological.

Prepare yourself for a slippage of time and space as your journey propels you across five distinct realms: you will pass through Fleshold Crossing; take respite in Known Unknown; lose yourself within Scumm Engine; bravely face impending danger in the tower of Gog & Magog; and experience the brink of sensory overload in the psychedelic Tumblewych. The mysteries of what you ultimately seek will be revealed: an understanding that reality is not fixed but rather both malleable and multiple. 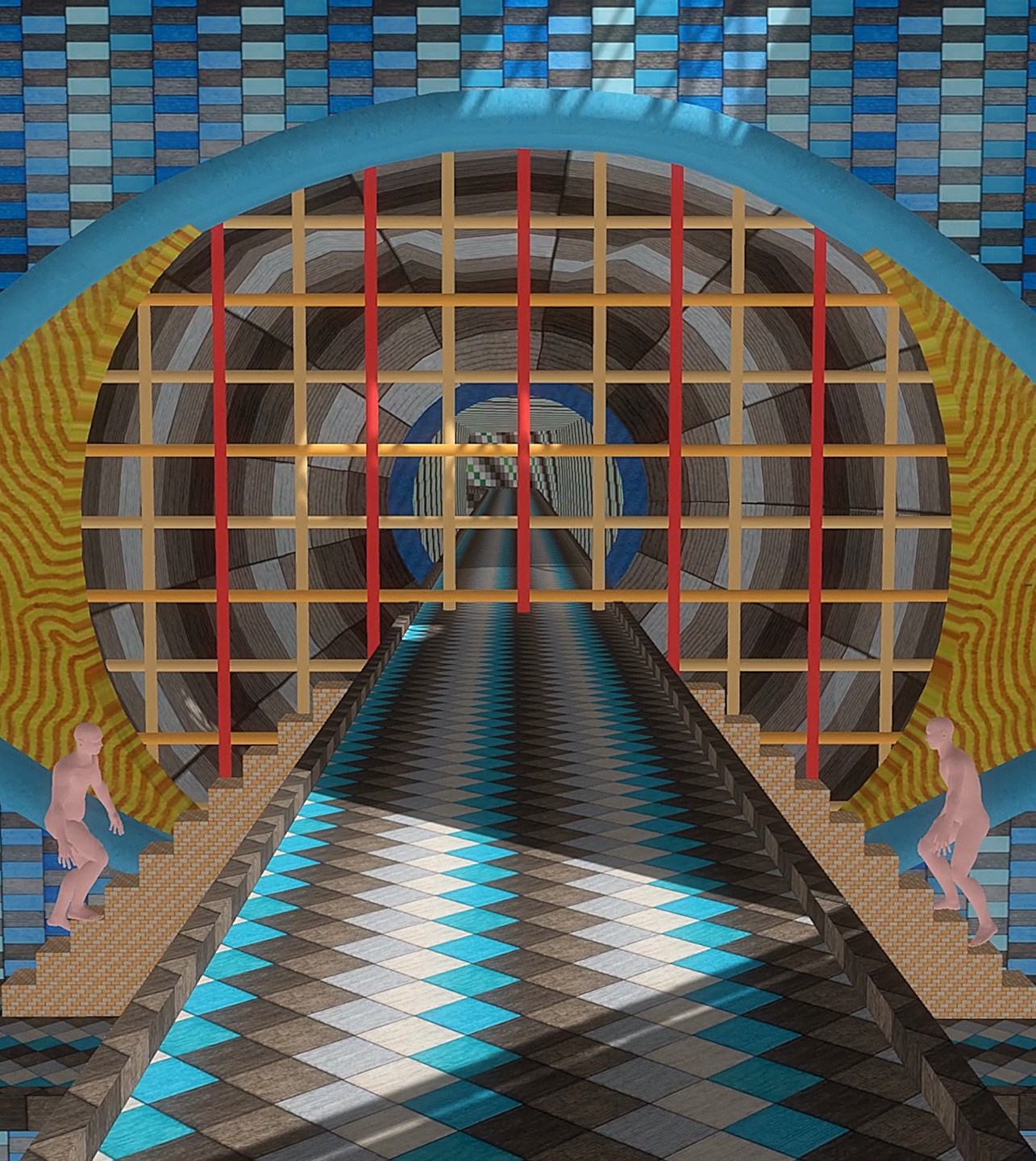 Terminus was commissioned by the National Gallery of Australia with support provided by The Balnaves Foundation 2017-18.

Terminus is being adapted specifically for Tauranga Art Gallery with the addition of original artwork and large-scale quilts, a collaboration between Jess Johnson and her mother Cynthia Johnson. The centrepiece of the work is five virtual reality artworks housed within bespoke structures situated on a tessellated floor map.

The structures of Terminus are custom-built VR stations. Each station operates as a portal, allowing audiences to experience the realm in virtual reality. The Terminus virtual reality experiences draw their imagery from the world that Jess Johnson has developed in her drawing practice over several years. Video artist Simon Ward translates these drawings into 3D animations and virtual environments using the game engine Unity.

“In the hands of artists, VR technology has the potential to explode into new genres and art forms. As an artist working in VR, I’m really excited by the psychological implications of being able to position an audience directly within my artwork.

I think VR is the most effective conduit from one brain to another that’s ever existed. With VR we are able to transport someone into an entirely new reality of our creation.

It’s relatively easy to seduce someone into accepting a virtual environment as ‘real.’ The experience of VR can be really disorientating, which also allows us to push against people’s accustomed perceptions and comfort levels. By transporting people to strange new realms we can also provoke new emotional and psychological experiences in our audiences. It will be artists who harness the technology and use it in ways we can’t even imagine yet, opening up new modes of storytelling, communication, expression, and exploration.” Jess Johnson

Jaklyn Babington, Senior Curator of Contemporary Practice—Global, National Gallery of Australia, spoke to Jess Johnson and Simon Ward about the conception and construction of their Terminus commission.

Banner image: Jess Johnson & Simon Ward, installation of 'Terminus', commissioned by the National Gallery of Australia with support provided by The Balnaves Foundation 2017-18.

More about the artists…

Jess Johnson was born in Tauranga, New Zealand in 1979. In 2016 she relocated permanently to New York after twelve years of living and working in Melbourne, Australia. Her practice is influenced by the speculative intersections between language, science fiction, culture, and technology. Her drawings depict complex worlds that combine densely layered patterns, objects, and figures within architectural settings.

Johnson’s drawings are often displayed within constructed environments that act as physical portals into her speculative worlds. Her recent collaborations with Simon Ward have involved translating her drawings into animated video and virtual reality, giving audiences the simulated experience of entering the hypnotic realms depicted in her drawings.

Simon Ward was born in Opunake, New Zealand in 1977. After completing tertiary study in Auckland he moved to Wellington, where he worked in feature film costuming for ten years. During this period he developed a video making practise which eventually became his major focus.

Ward’s work in video and animation is varied and usually involves collaboration with musicians, writers, or visual artists. He has made over 50 music videos for New Zealand and international artists and co-directs the animated series Aroha Bridge, produced by Piki Films.  His video and virtual reality collaborations have been shown in New York, Tokyo, Hubei, Edinburgh, San Francisco, Melbourne, Sydney, and Hong Kong.

Ward employs a DIY approach that utilises self-taught effects and animation techniques. Influenced by the history of cinematographic special effects and animation, his work involves generating visual imagery that mixes reality with the fantastical. New developments in virtual reality technology have allowed him to explore these reality-warping techniques in far more immersive environments.