The video is a comical allegory of migrant arrival stories, and about the encountering of 'others' whether foreigners, migrants, or aliens. The bags are typically used by Polynesians as luggage in their frequent air travels, and act as the medium or symbol, for the mobile idea of contemporary Pacific identities. Born in New Zealand of Samoan heritage, Fuata grew up in Australia. He is a writer and performance maker interested in hybrid and interdisciplinary practice having made solo and collaborative works for theatre, video, media, sound, site specific and gallery environments. Fuata has created and performed short works in Unbecoming (2000 and 2001, co-produced by Performance Space, Sydney Gay and Lesbian Mardi Gras, and PACT Youth Theatre), which won the Mardi Gras Festival Award 2000; and Kiss My Fist (2002). He has worked with performance artists Guillermo Gomez Pena and Victoria Hunt. He is currently working in London.

Fa'anana is a New Zealand-born, Brisbane-based choreographer/dance artist of Samoan heritage. He is co-founder of Polytoxic, an independent Brisbane-based dance company that fuses Polynesian, contemporary and street dance styles. With tongue-in-cheek performances they also aim to transcend dance genre boundaries and debunk orientalist notions of Polynesian culture. Fa'anana has a Bachelor of Arts in Theatre. He works collaboratively with visual and performance artist Luke Roberts, performing at the Museum of Contemporary Art for the 2002 Sydney Biennale and at the Luke Roberts Studios, as well as performing for companies including KITE Theatre and Abigails Entertainment, and Kooemba Jdarra Indigenous performing arts. 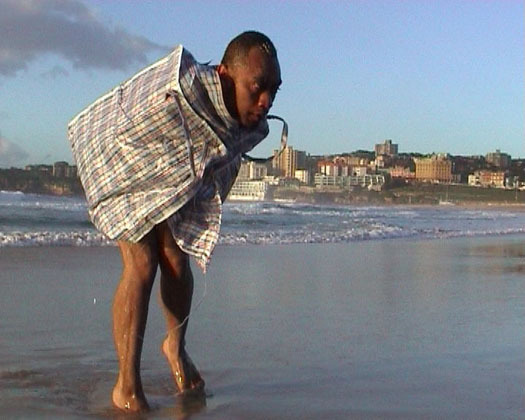 Born 1969 in Wellington, New Zealand. Rakena studied at Otago School of art and now lives in Palmerston North where she lectures in Maori Visual Arts at Massey University. She has been exhibiting widely for the past 10 years throughout New Zealand, Australia and Europe, and in the UK and USA. Her work has been included in major international exhibitions such as the Busan Biennale 2008, Venice Biennale 2007, and Sydney Biennale 2006. Rakena uses a diversity of approaches from digital stills and video, to installation and performance in order to explore ideas about Iwi (clan-based) identity , and the subjects' dis/embodiment in cultural, digital and water spaces. many of her works have been collaborative or included contributions from other artists including sculptor Brett Graham, musicians Whirimako Black, Deborah Wai Kapohe, Richard Nunns, and Paddy Free, dancer/choreographer Louise Potiki Bryant.