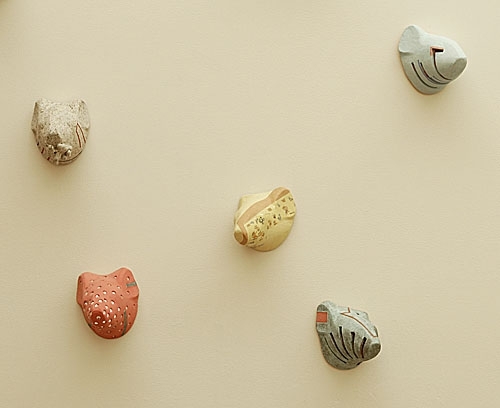 A plague of small rabbits is running riot on the ground floor of the Gallery.

The rabbits are the work of Tauranga artist, John Roy, and will form part of a solo exhibition Roy is preparing to hold in Wellington at the end of the year. Tauranga gets the first glimpse.

For this exhibition Roy wanted an undesignated gallery space that was on the periphery, out of immediate site, so has chosen the walls adjacent to the lift and kitchen.

“Infestations usually start in a small corner off to one side, and kitchens and dark recesses are synonymous with hidden menaces that skulk in corners,” he says. “Only the vigilant observer will see what is lurking on the periphery both physically and metaphorically – much like the material used on the edges of art such as clay. Some people will miss it altogether both as a point and an artwork due to it being outside a designated gallery space.”

Much of Roy’s work revolves around iconic forms that bring with them a preconceived meaning, but that allow him to introduce his own ideas and thoughts that challenge other people’s perception of the object in a subtle way.

“Rabbits are cute and cuddly, and easily identifiable to people – but they are pests to some people.”

Roy’s use of pastel colours for the rabbits adds to the allusion. Even the white rabbits hide a subtle tinge of green, much like mould growing on cement.