Frances Hodgkins is considered one of New Zealand's most prestigious and influential painters, an esteem not bestowed upon her during her lifetime due to her Post-Impressionist style not conforming to the traditional New Zealand landscapes of the time.

Born in Dunedin, Hodgkins moved to Europe, and later England, in the early 1900s where she established herself as a painter and enjoyed success. In 1908, Hodgkins became the first woman to be appointed instructor at the Acadamie Calarossi, one of the city's leading art schools.

However the outbreak of World War I forced her to relocate to Cornwall, England, where she had more time to concentrate on her painting. She referred to this period as her 'experimental years', and by 1927 she was able to finally give up teaching and become a full-time painter, exhibiting with many galleries throughout London. Toward the end of her years, Hodgkins finally gained the acclaim she deserved, and her works were highly sought after. At the time of her death in 1947, aged 78, Hodgkins was regarded as one of Britain's leading artists.

Femme du monde draws from the Dunedin Public Art Gallery Collection, and also contains works from private collections in the Bay of Plenty, including that of local eccentric, 'Springheel Jack'. 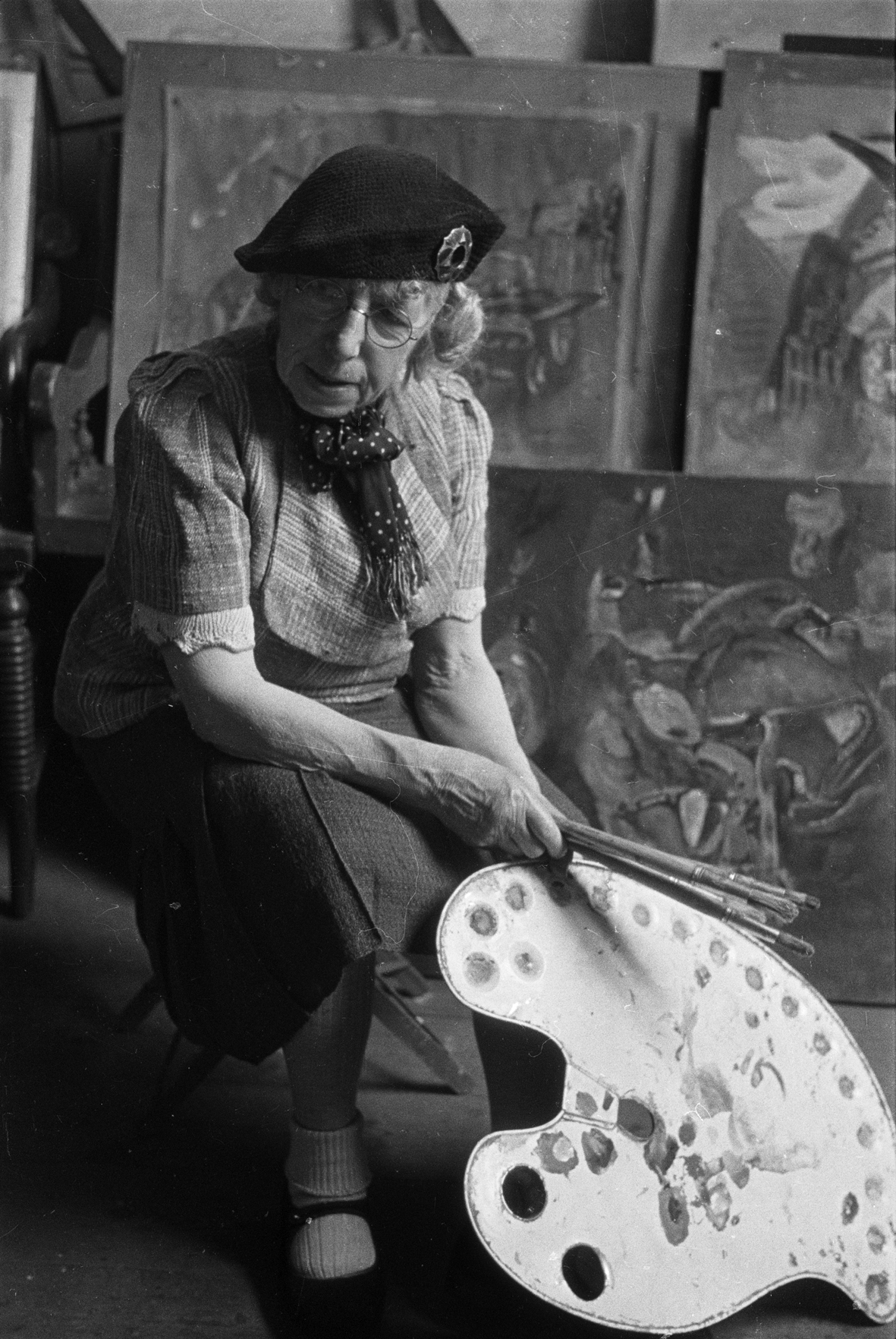 When flicking through art auction catalogues, works by Frances Hodgkins command very high prices. This is understandable given she is one of our most renowned artists. She lived, painted and exhibited in a very difficult context, yet she made a name for herself both in Britain and New Zealand. So why is it, that no one collected her ashes after her cremation or that she lived in poverty during her late years?

As a nation we should be embarrassed of both situations and yet somehow it embellishes, or romanticises, the story of the struggling artist. And she wasn’t the first artist to suffer such bad luck. Think of Vincent van Gogh – he only sold one painting during his lifetime and that was to his brother Theo. Rita Angus, too poor to have her own transport, caught the bus when undergoing regular cancer treatment at Wellington hospital.

Frances Hodgkins struggled against many odds to become a professional artist. Firstly, art was not her desired career path. Born in 1867 in Dunedin, Frances was the musical child in a family of four brothers and one sister. Her sister Isabel was the painter. Indeed both girls were fortunate enough to receive a private education in burgeoning Dunedin in the 1880s. The Hodgkins boys attended state schools. But for young women, if a private education could be had then it was a bonus, not only for future marriage possibilities, but also for the ability to procure a trade. For instance, an art education could lead not only to a painting career but subsidiary trades such as book illustration.

Frances Hodgkins’ father, William Mathew Hodgkins (1833-98), was a Dunedin lawyer, amateur landscape painter and founder of the Otago Art Society. When William was made bankrupt in 1888 Isabel carved a niche for herself as a painter. Seeing how well her works sold, and that she could assist in keeping the family, William encouraged Frances to follow in her sister’s footsteps.

Stifled by New Zealand’s limited art scene, Frances headed to England in 1901. This began a lifetime of travel, temporary accommodation and the struggle to sustain a living. She was attracted to places like Holland and Concarneau for subjects such as boats and the reflective qualities of light. For more exotic subject matter she ventured to Tangiers and Morocco, where market places filled with brightly coloured spices and produce gave her new possibilities to challenge her palette with. She returned ‘home’ too – as the single daughter of her family were always family obligations to undertake.

From 1932 onwards Frances was contracted to Arthur Howell, a London art dealer. With an annual quota to fill, Frances often felt under pressure to deliver work to her dealer. This wasn’t always easy given the context in which she lived. The pressure to paint for her income did not bode well with her need to develop and explore stylistically. Based in the south of England, during World War II, her subjects were repeatedly of farm machinery and the ruins of Corfe Castle in Dorset. The grayness of both time and place resonate in these last works. In 1944 she wrote, ‘the planes overhead bringing back wounded … have scared all art out of me – I simply cannot paint’.

Watercolour was Frances’ main painting medium; cheaper than oil paints and quick drying, the watercolour technique was one she learned during her Dunedin days. Her father’s art club was made up of keen landscape artists, working in watercolour. By their very nature, watercolour paintings are smaller than their oil counterparts. And there was the added bonus that watercolours and the paper used were cheaper than oils and canvas. For the emerging, or struggling artist, this was of paramount importance.

Though Frances never visited Tauranga, there is a link. Not only are there several of her works in private collections, her nephew, Michael Hodgkins, lived here. Known by locals as Springheel Jack, Michael Hodgkins, lived an alternative lifestyle. His hut, located near the Otumoetai railway siding (not far from the current Cherrywood roundabout), had no power or running water. To keep out the winter drafts he had several of his aunt’s paintings attached to the hut’s walls. Many remember Springheel Jack fondly for his kindly assistance to schoolchildren with their homework. Others remember how he was ridiculed on occasion.

In addition to the 30 plus works in femme du monde, there is a handful of works from private collections. This goes some way to demonstrate the importance of private collections in our community and to exhibit paintings that have not previously been shown publicly. One work, The Meat Market, Dinan (1902), appears in a photograph of Frances taken in 1904 at her Wellington studio. The painting, from a private Tauranga collection has never been shown publicly before. The combination of well-known works, from Dunedin Public Art Gallery, and the very private works from local collections makes femme du monde exciting and engaging for visitors.

Frances Hodgkins is one of the country’s best-loved artists, but she wasn’t always. After her death, in 1948, a Frances Hodgkins, 1945small band of art enthusiasts decided Frances should be represented in various public collections, as a mark of her success. The Pleasure Garden (1932), a watercolour of a still-life/landscape scene, was destined for Christchurch. But alas there was a public outcry. Those who thought this nice New Zealand artist had gone off the rails outnumbered those in favor. They thought the work too modern and did not want it to become part of the collection. For months ‘The Pleasure Garden Incident’ (as it became known) raged. Fortunately the work was finally acquired and is now one of the most prized pieces of the city’s public art gallery collection.

Frances died in 1947. A small funeral with just one floral wreath, Frances’ ashes were claimed years later by New Zealand art historian, Eric McCormick, whose first book about Frances Hodgkins was published in 1954.